With widespread availability of cell phones, tablets, and computers, calculators are accessible to almost everyone.  But calculators are only as “smart” as the input given to them by the user.   Try this problem.

This method works because of the distributive property. 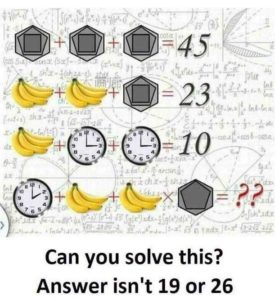 This problem/riddle has been pretty popular on Facebook recently. At first I was annoyed by it, but some comments from colleagues, as well as responders on Facebook, got me thinking more about it.

Why such interest in a math problem? Unfortunately there are too many folks out there turned off by math. But there’s something in the presentation here. People like games, puzzles, and riddles, and this feels more like that than a math problem. People are willing to engage with this puzzle in a way that they may not be with a less “friendly” looking math problem. That’s something for teachers to think about with their students. How can you pose problems that hook students? That’s another topic I’d like to address later.

Another thing that intrigued me about the wide variety of answers offered, and a couple questions came to mind. (1) Could there be more than one “right” answer? (2) Why do we require validation in a math class?

These two questions go together, I think. For the 2nd part, a worthwhile goal for teachers is to get students talking, debating, and really reasoning deeply about mathematics to the point where they DO feel more confident. If you discuss, revise, and refine your work, you’re going to be more confident without a teacher telling you whether you’re correct or not.

So let me offer my thinking on what THE correct answer is.

First let’s get something out of the way regarding arithmetic. We have certain order of operations conventions that do show up in real life, but essentially are agreed upon ways to operate on numbers while doing arithmetic. So, without belaboring this point, in Line 4 we agree to perform the multiplication prior to the additions. We can’t debate this any more or less than we can debate which axis we refer to as x and which we refer to as y in the Cartesian plane.

Next we need to agree on something about the nature of variables. In this problem, each variable is taking on the role of an unknown. For example, in the equation x + 2 = 6, x must be equal to 4. If there is more than one x within an equation, such as x + 4 = 2x + 3, both x’s must take on the same value, which in this case is 1.

In our problem here, we may rightly assume that these pictures represent variables, and this is in fact a singular problem where the variables are connected to one-another in a way that is similar to my example above. But we notice that the geometric figures in Line 1 are all exactly the same as one another, but different than the one in Line 4. The same goes for the bananas on different lines and clocks on different lines. This may throw a wrench in things, and is what is probably causing such a kerfuffle.

Line 1 has three of the same geometric-type figure, whose sum is 45, so that figure must be equal to 15, because 15 + 15 + 15 = 45. This figure is interesting in the fact that there is a square inside of a pentagon inside of a hexagon. So here are three different ways of looking at it (and there may very well be more). The total number of sides of these three polygons is 4 + 5 + 6 = 15. That corresponds to the value of the figure. Or the figure is made up of three polygons, so each of the polygons is equal to 5 because 5 + 5 + 5 = 15. Or we could just as fairly conclude that a geometric figure such as this one is equal to 15 no matter how it is constructed. This will have bearing on Line 4.

Line 2 has two bunches of bananas, each consisting of four bananas. We know that each bunch must be equal to 4, because 4 + 4 + 15 = 23. Similar to the reasoning above, ANY bunch of bananas in the puzzle could be equal to 4, or we could also reason that each banana is equal to 1.

Line 4 is where we take our assumptions and “plug them in.”

From above, here are some different, valid solutions, based upon interpretation:

And there are other variations based upon which assumptions you want to make for these variables that, I hope you can see now, are NOT well-defined.

And herein is one of the problems we have with mathematics in our society, which is probably an outgrowth of what happens in our classrooms. The focus on results and right vs. wrong far outweighs the focus on process, reasoning, debate, and critical thinking. It should be the other way around. The question on Facebook is “Can you solve it?” I’m not sure if I “solved it,” but I do know I thought a lot about mathematics, and did a lot of what Common Core expects us as educators to impart to our students. These are things that I had to do above to work through this problem and then explain my thinking to you, things like:

If you have a reply, I’d love to see it.

Should Math Be Fun and Real-Life?

We often say in mathematics education that we need to make math fun and real-life. I disagree. Ideally, I’d love it if students found mathematics fun, and I’d also love it if all the mathematics we taught in school was useful in real-life. So I’m neither anti-fun nor anti-real-life, I just don’t think it’s always as crucial as everyone seems to think, nor do I think these things will ever happen. And I’m not concerned about it.

Check out this short video from mathematician and pianist Eugenia Cheng, who speaks to the importance of the message that mathematics can be fun and interesting, not merely useful.

It’s a great message, but how do we get that across to our students? One of the more popular mathematics educators these days is Dan Meyer. If you haven’t seen this before, and you want to think about making mathematics more interesting and relevant to your students, watch his TED talk from 2010 https://www.ted.com/talks/dan_meyer_math_curriculum_makeover#t-120326.

Another set of great ideas from Dan are his “Three-Act-Math” lessons that lots of folks are imitating. He’s inspired us to include his great ideas in our MathLinks programs, like the record setting balloon popping dog. And I think this math is fun AND interesting. http://www.101qs.com/3933-world-record-balloon-dog.